Yesterday, we made the most of the weather and spent a lot of time in the garden. I suggested making foliage crowns for the girls and they collected a few leaves and flowers for me before their interest waned 🙂 I just used some gardening wire and wrapped to it fit their heads. They I used my jewellery wire to attach leaves, etc. I hope to make a second attempt at it when they’re in a more focused frame of mind 🙂 I might use a less visible colour of wire next time though 🙂 The girls still insisted on wearing their single-leafed headbands 🙂 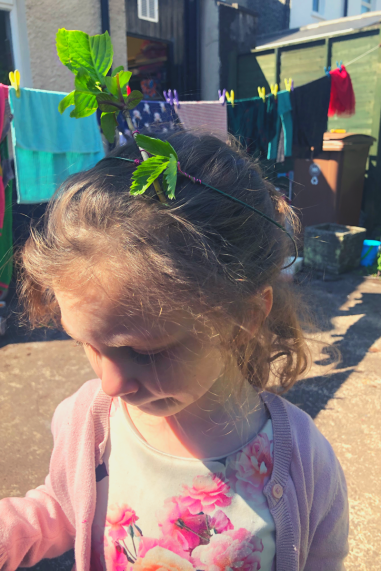 I got to read a complete short story in the sun (which is an achievement when the girls are awake.) I filled the old baby pool we have with bubbly warm water for the girls to soak their feet in. It seems to provide as much entertainment as the full-sized pool we used to have and takes much less time to fill 🙂 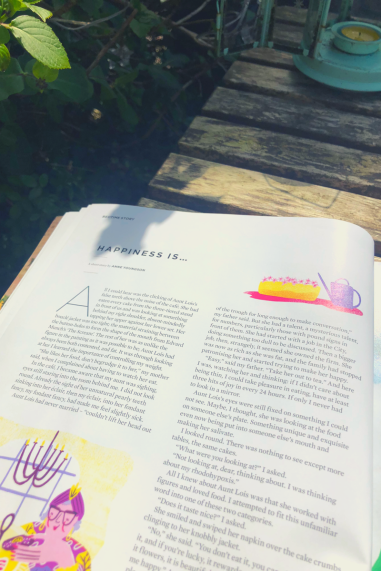 I noticed that my tomato plant was getting too big for the windowsill, so I repotted it outside. I’m hoping it continues to thrive there and that one day it might even produce a tomato 🙂 Some daisies I planted a couple of years ago have come out again, along with a few yellow poppies. It’s nice seeing bits of colour in our garden, however limited 🙂 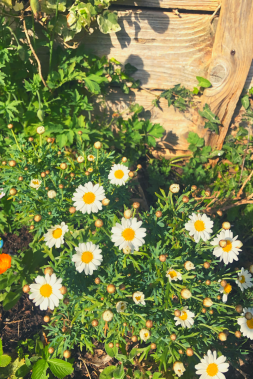 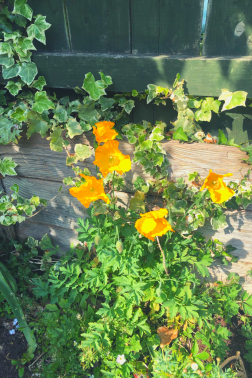 I came across a cake recipe in a magazine that I wanted to try. It had cardamom in it, which I’m obsessed with. I love Indian dishes, chai tea and anything with that flavour in it 🙂 I had some overripe bananas to use up, so I made a cardamom banana cake. I didn’t realise that to release the flavour of the cardamom, you take the seeds out of the pods and crush them (I’ve been using them whole or blending the whole pod.) You learn something new every day 🙂 It was a slow kind of cake to make and the girls were otherwise occupied for a change, so I enjoyed sifting ingredients and taking my time over it. It produced an aromatic, indulgent kind of banana bread and I had to bake it in a roasting tin because there was too much batter to fit in a cake tin 🙂 It produced large wedges of cake that are too easy to eat 🙂

This morning, I took the girls for a walk on the Greenway. We went early and the pathway was quite quiet. The girls collected dandelion clocks along the way and named each one. I looked around and tried to identify different plants and weeds along the way. I read in a magazine that there are certain weeds you can use to make pesto, but I have to figure out how to identify them first 🙂 I also wanted to try to make nettle soup or tea, but have to find some first 🙂 I don’t often go for walks with gardening gloves on so it might be tricky to do that one.

On the way home, we spotted a tree that had been decorated with rainbows and kids’ craftwork. (Sorry if this is your tree but I had to take a picture of it because it really brightened our day.) The girls asked if we could make something similar, so I’m going to work on adding things to some of the hedges outside.

I think I’m just starting to recognise the creative potential of toilet roll tubes 🙂 It’s funny how when you don’t have access to craft shops, you save everything in your house to use in future projects. We made some simple toilet roll tube flowers. I just got the girls to paint the tubes green, I cut some leaves out of an empty box and then they painted them and added glitter. When they were dry, they attached the leaves and I cut two slits in the tops of the tubes to slide their flower heads into. They were easy to make and kept them entertained for a while 🙂 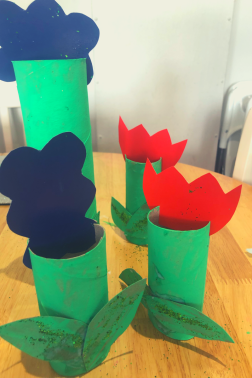 Afterwards, the girls worked on some more rainbow-themed items. They spread glue onto cardboard and used some confetti to make collage rainbows. Then we made some colourful feather hangings to put outside. We didn’t have any wool or ribbon, so we used gift ribbon I found in the cupboard 🙂 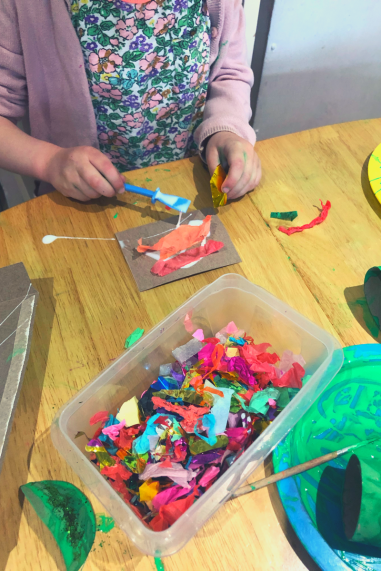 I made a quick yeastless pizza for lunch and then we spent some time in the garden. The girls made a pretend campfire in the middle of their tuff tray. Once it turned into a runny pile of mud, we converted it into a lego table and the girls made some cars and flowers. We had a very American style dinner and the girls discovered a new love for ribs with barbecue sauce. I don’t know what tomorrow will bring and I no longer have the energy for planning anything 🙂 I’m just hopeful it’ll bring some sun with it.