Yesterday morning, I had the luxury of a lie-in (almost – until after 7.30am :)) Our pace of life is changing and I can feel the girls adapting to this new way of living. I decided not to rush the day. There was no reason to hurry to get ready, to rush my morning coffee or to not sit and have some quiet time to read. I like the fact that there are no deadlines for anything.

We did some yoga, listened to Jimi Hendrix and played tag in the living room to burn off the girls’ excess energy. They spent a while making mud pies in the garden. I made a little table for them to “cook” at out of an overturned concrete plant pot. At least now I might be able to have a cup of coffee outside without straggly bits of soil floating to the surface 🙂

We worked on a list of needs and wants from my daughter’s school and I adapted it for my younger daughter so she could join in. She made a list with pictures while my older daughter wrote the words. Then I asked her to cut out pictures from a catalogue that had come through the letterbox. She spent some time cutting out furniture, ornaments, etc to make her own room scenes. I thought she could mix them up and create her own pictures of rooms on a piece of paper (like interior decorating for four year olds :)) She’s happy any time she’s offered a pair of scissors, so it kept her busy while I finished schoolwork with my older daughter. Then, they had some free play time. The last few days have felt very unstructured, and it’s strange to think that that is encouraged now, after life being so busy the last few years, with so much emphasis on achievement.

We had lunch and then spent time together in the garden; just feeling fresh air on my face and the warmth of the sun is enough to lift me out of a low mood 🙂 I had some tumeric chai and we talked to family on Facetime. The girls continued making soil desserts and I tried to turn a blind eye to the marshland that our garden has become. It keeps them busy and happy for so long, it might be worth the mess. We went for a walk nearby and I could already see changes to the trees and more colour than the last time we were on the Greenway 🙂

Afterwards, we made some unicorn biscuits together. It came in a box so we just had to add butter to make the dough. The girls enjoyed icing them with melted chocolate and rainbrow drops. I don’t usually try any of the kids’ boxed buns, but I had one with a cup of tea and it was like shortbread with extra toppings 🙂

We spent the evening eating homemade pizza while we watched a film and I gave the girls some ice-cream with a swirled chocolate spread on it. It made a good sundae sauce 🙂

This morning, we completed some more of the activities from my daughter’s toucan box. The girls used watercolours to paint a dream catcher and a headband. They seemed to instinctively know how to attach the feathers and beads. Maybe it’s their Native American heritage 🙂 After getting ready, we went for a walk to clear our heads. I was started to feel cooped up in the house and the girls had far too much energy to run off in the garden. It was quiet while we were out and we did some rainbow-spotting in house windows. The girls talked about painting rainbows on different materials. They had spotted some on a nearby fence painted on fabric, thick cardboard and made out of paper plates. I like seeing everyone’s creativity coming out during times like this 🙂

After lunch, I made some salt dough. I used rock salt in it, instead of using up all our regular salt and it works fine – it just gives the salt dough more texture. I’ve seen a lot of posts about baking it in the oven for hours on end, but the recipe I use only takes about twenty minutes in the oven and we have had no problems with it setting. I have some Easter cookie cutters, so the girls cut out bunnies, chicks and Easter eggs. After hardening them in the oven, the girls enjoyed painting them and adding glitter. 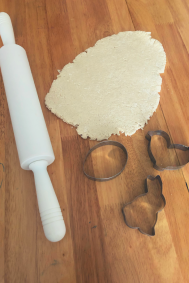 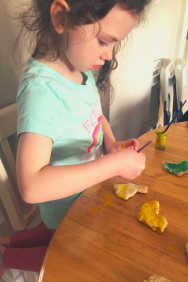 If I’m honest, I’m struggling this weekend, but I’m finding that the small things uplift me – cherry blossom on our walk, seeing colour appearing in the greenery, a comforting cup of tea and hearing the sound of another adult’s voice on the phone 🙂 I plan to go easy on myself tonight. I have been in productive mode for a while and have been busily doing lots of activities with the girls, and now it feels like it’s a time for rest, surrendering to a bit more TV time and taking the time to give myself as many treats as the kids get 🙂