I have so much catching up to do on my blog. It feels like every day has been crammed with things to do and I haven’t had a huge amount of down-time for writing. This week, the girls and I spent a lot of time outdoors, even when the weather wasn’t on our side 🙂

We went to Mount Panther for the first time. Although the entry is quite expensive, I thought it was worth it and we spent hours there. My daughters agreed that it is their favourite place now. It is well laid-out for kids. We started with the petting farm and we got the chance to see some unusual animals. I had expected to find the typical animals you find on a farm, but there were bearded dragons, snakes, pygmy marmosets, meerkats and a thirty-year old tortoise. There was also a cockatoo that says hello if you say it first 🙂 The girls got to hold a guinea pig that was surprisingly friendly. We used to feed my friend’s guinea pigs when she was on holiday and they hid from us every time we visited 🙂

Outside, we went to a little town they had made for kids. They pedal from shop to shop on tractors. There was a playground and one of those permanent bouncy castles in the ground – I still don’t know what those are called! We got to feed the deer and goats and looked at the wallabies. I’m not sure what the difference is between wallabies and kangaroos, but my kids were excited to see the “kangaroos” anyway, and so was I 🙂 They stood and waited for a long time, hoping to see them jumping. I like the way nature keeps my children in the moment and teaches them how to stand still and wait for something. Usually they don’t do this at all 🙂

We went on the barrel rides over the fields and there was a deer safari, but it costed an extra £12 for a family, so we didn’t go. We got to feed the deer in their outdoor enclosure anyway 🙂 At the end, the girls asked me if we could go again the next day which is always the sign of a successful outing 🙂 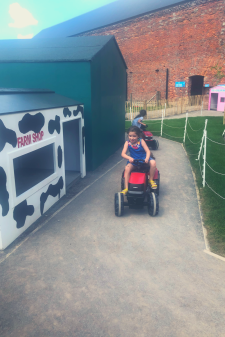 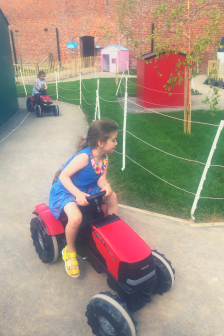 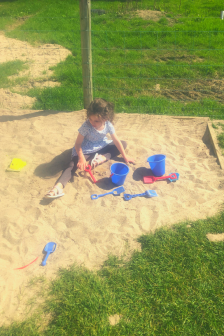 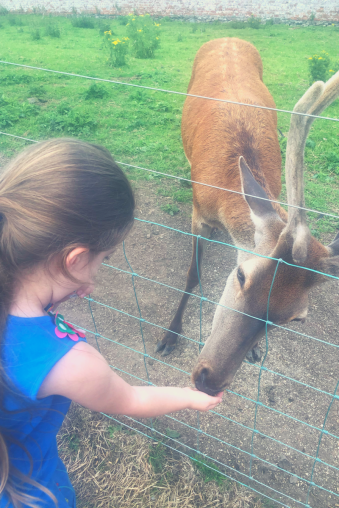 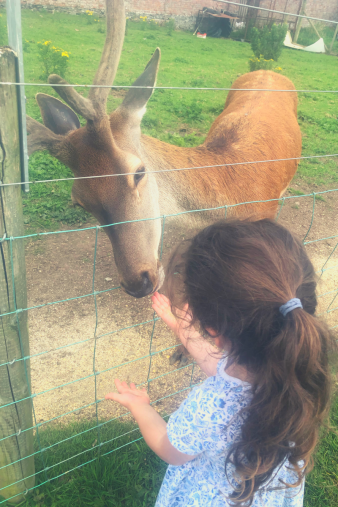 We have been hoarding cardboard and empty boxes, etc for crafting. The girls often use their junk box without my involvement now, making gift boxes for doll’s birthday presents 🙂 They like to have a different toy’s birthday each day, to console themselves over the fact it isn’t one of their own birthdays 🙂 We made some toilet roll tube unicorns I saw online. I tend to look for inspiration online but don’t have the patience to read the instructions, so we just make it up as we go along 🙂 We made some pink paint and the girls painted their unicorns pink and white, adding dots of paint for cheeks. I also just cut shapes out of another toilet roll tube to make the ears and horns. We used yellow paint on the unicorns’ horns and added lots of glitter while the paint was still wet. We let the parts dry overnight and then added manes and tails that we made out of colourful embroidery thread. If you wrap it around four fingers and keep winding it until you have several layers you can tie a knot around it with the end of the thread and then jut cut the end of the loop open so it hangs like hair. We glued them all together and then I added eyes with a marker at the end. I still don’t know where to store all of our cardboard creations. The girls act like each one is their most treasured possession and immediately notice if I try to throw any out (even when they aren’t in the room – I think they can sense it.) I’ve been experimenting with new recipes this week. I wanted to make some healthy snacks, so the girls helped me to make cashew nut energy balls and nut bars – both of which they refused to eat! I made some pineapple chicken to use up what we had in the fridge. It turned out like a chinese-style meal and was surprisingly good 🙂 The girls both ate the sauce and I was stunned. 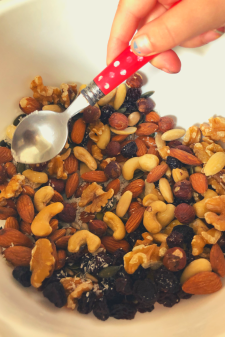 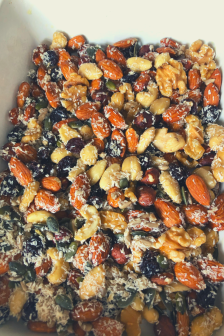 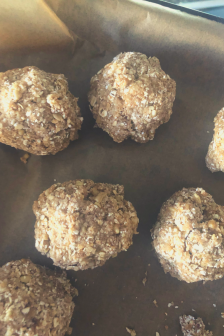 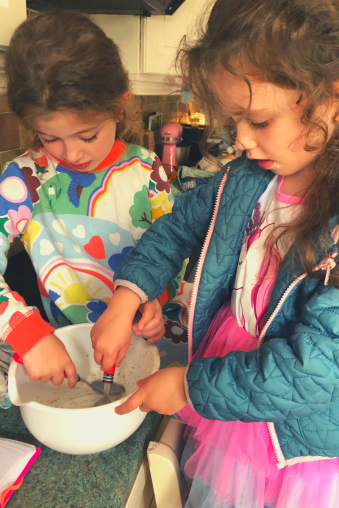 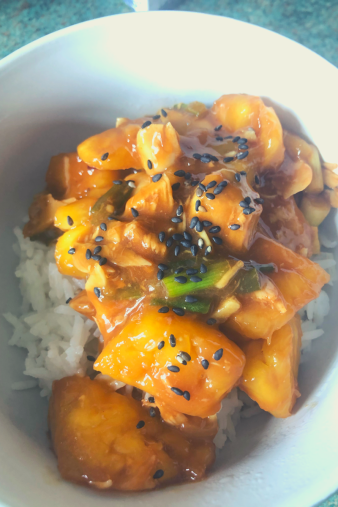 My kids’ Toucan boxes arrived, so they completed the activities inside. One was to make a hanging picture of cherry blossom. They used lolly sticks as the frame and a pipe cleaner as the hook. There was also a crown to make and a fish puppet. The girls are interested in colour mixing at the moment, and if I give them watercolours and lots of paper, it keeps them busy for a long time. My older daughter asked me to move vases of flowers onto the table so she could paint from them. I’ve been thinking of doing the same with nature finds soon. 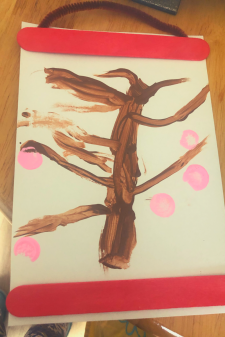 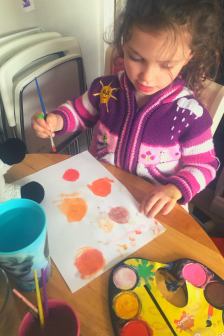 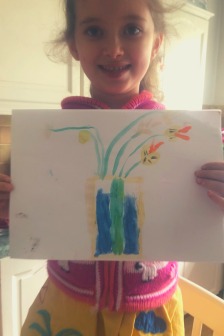 We made some easy cookies using just bananas, oats and chocolate chips. The girls took their bikes to the Greenway and afterwards, I made some hot chocolate to warm them up since it was such a gloomy day. I made some homemade burgers and chips and we had a board game dinner, which is the girls’ favourite thing to do (apart from watching TV while they eat – or while they do anything for that matter :))