After neglecting my blog for a little while, I realise how much we must have been doing since I last posted. It seems to be difficult to condense it all into one post 🙂 We have been spending a lot of time at the seaside and making crafts and baking at home. I took the girls to a beach last week, early in the day, so it was at its quietest. They enjoyed walking on the boardwalk and over the sand dunes 🙂 I love looking at the backdrop of mountains near Newcastle. The combination of sea and mountains is one of my favourite things 🙂 The tide was out and had left lots of little puddles and channels for the girls to paddle and jump in, so they were easy to please 🙂

At home, we used some of the girls’ nature finds to draw pictures from. We set up a table a bit like the one in the Ulster Museum art room 🙂 We have the same chunky colouring pencils to draw with and they make it much more satisfying for some reason 🙂

I also got out an encyclopedia for kids with pictures of sky scrapers in it. I cut up some leftover party straws and gave the girls glue and paper so they could recreate structures with them. One opted for the tallest building and the other made a miniature eiffel tower 🙂 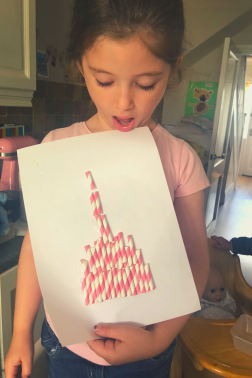 I wanted to try to make polenta cake. A friend of mine made some a long time ago and served it to us with lapsang souchong tea. I really liked the combination of the two flavours. So, we made an orange and blueberry cake using polenta instead of flour. It has a grainier texture but I liked it and it felt light compared to a stodgy cake. 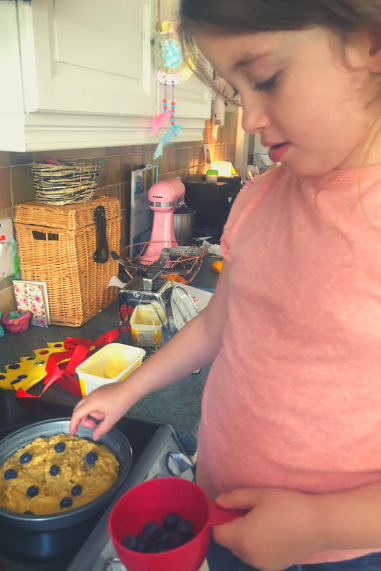 We have season tickets for the farm, so we have been spending a lot of time there. The girls spotted the mice nibbling ice cream cones and wanted me to take pictures of it 🙂 There are also some baby mice and piglets there now. We arrived just as a lady was about to feed apples to the pigs, so the girls got to feed them and it was funny watching them eating whole apples in one bite 🙂 We got to pet chicks and bunnies and went on the barrel rides 🙂 Afterwards, I treated the girls to a hotdog each for lunch 🙂

I have been trying some healthy snack recipes – none of which can I get the girls to eat 🙂 I made carrot cake balls, using carrots, nuts, coconut, etc. I thought they wouldn’t satisfy my craving for carrot cake, but they contained all the same flavours without being too heavy 🙂 But the girls immediately detected the fact they were healthy and refused to eat them.

For their benefit (and for mine), we made some peanut butter and chocolate rice krispie buns. I can see why it is such a popular thing to bake with kids, because it skips ahead to their favourite parts (licking the bowl and sprinkles) without any of the measuring and mess (or agony for me.)

My daughter decided to make her own wands out of lolly sticks. She gave my other daughter a little craft chest filled with materials for her birthday. They have both used nearly all of it already 🙂 I like the fact that they come up with their own ideas now and work away at them (even though it does result in them dragging the contents of the craft cupboard out onto the floor.)

We also made some little toilet tube horses. You have to fold them flat and cut the shape around the legs and head before folding them out again. The girls painted theirs with white and black spots, and when they were dry, we added heads cut out of cardboard and manes and tails made with embroidery thread. We also made feeding trays out of egg cartons and the girls painted water and food/made cardboard hay for them. They also made a stable out of an empty cupcake box, but they lost patience when they were halfway through painting it 🙂 I cut half doors into it so they could put the horses inside and it has been the most popular toy of the week. 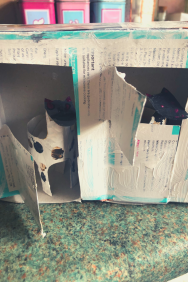 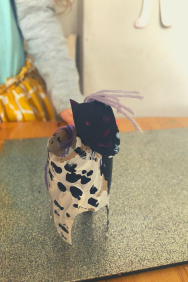 Finally, I gave the girls some squares cut out of empty cardboard boxes and they painted them bright colours. When they had dried, we collected nature scraps from the garden, like twigs, petals and dry leaves and they made little pictures with them. One made a little house and the other made a bug with antennae and pom pom eyes 🙂 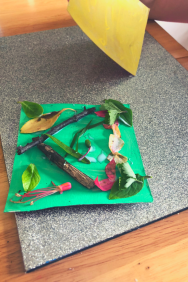 This week, we are on a nearby “holiday,” so we should have plenty of activities to share from it soon too 🙂