We have had a quiet, nature-filled few days. This week, I took the girls to Castle Ward for the day. I like the fact that when it’s raining there, you are still sheltered. The trees all make a huge covering, like a giant umbrella and we had our picnic underneath a tree. We walked around the sunken garden and the girls played hide and seek in the rocky area. We found a huge fir tree and discovered that it was a good climbing tree 🙂 I find it very healing being close to greenery and trees. There is something about the scent that envelops you when you’re standing underneath one, particularly when it’s raining. We walked down to the kids’ nature trail and they still had some of it laid out. The girls left mini bouquets for the fictional frog that owns the summer house 🙂 There were dens to hide in and swampy paths to navigate. My daughter took advantage of the fact she was wearing wellies and jumped in the largest puddles she could find 🙂 We came across a giant tic tac toe carved out of wood, as well as some balance beams and a car carved out of a tree trunk. 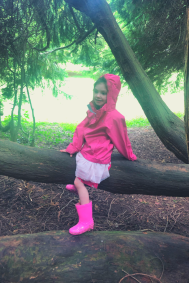 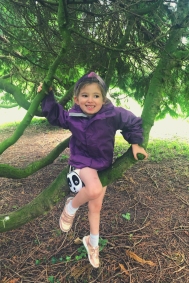 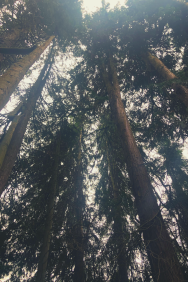 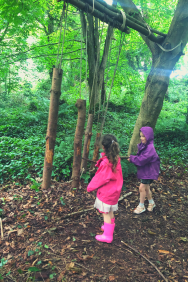 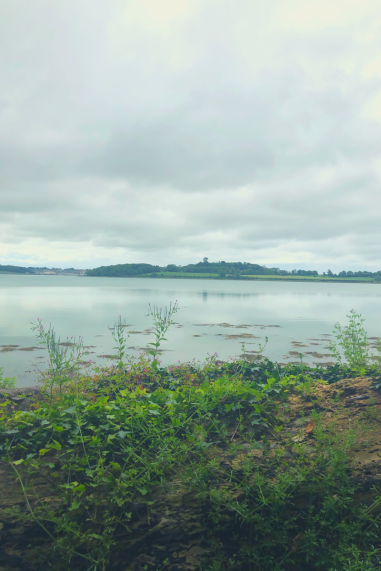 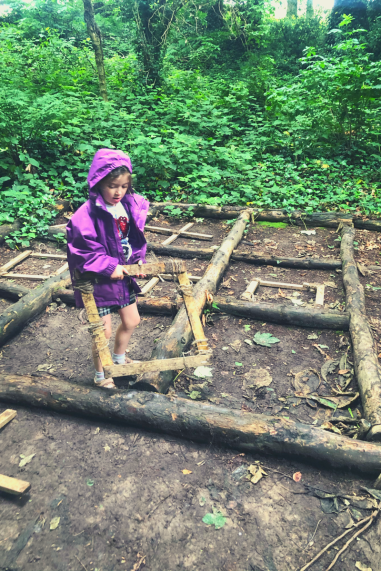 On our way home, we stopped at a roadside farm shop that served coffee. I got a coffee and traybake and the girls had an ice cream each and I was amazed by how cheap it was. They had wooden seats to sit on outdoors and the scenery was lovely because we were overlooking the green fields and hills 🙂

We tried a couple of crafts this week, some more successful than others! We made miniature jar lid bangos. They were very easy to make and the girls loved “playing them.” We just stuck two lolly sticks together using washi tape to secure/decorate them, then wrapped some elastic bands around the jar lid. We added tape at the back to secure the “strings” and then taped the lolly sticks onto the back of the strings. 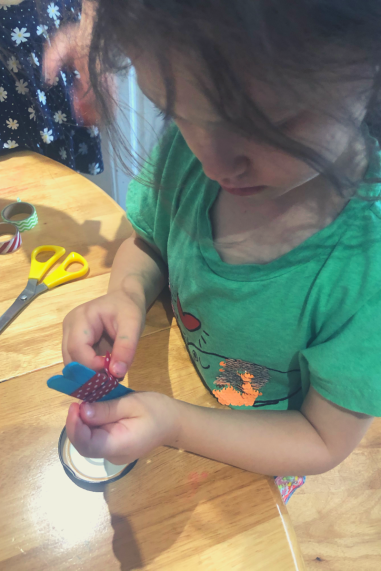 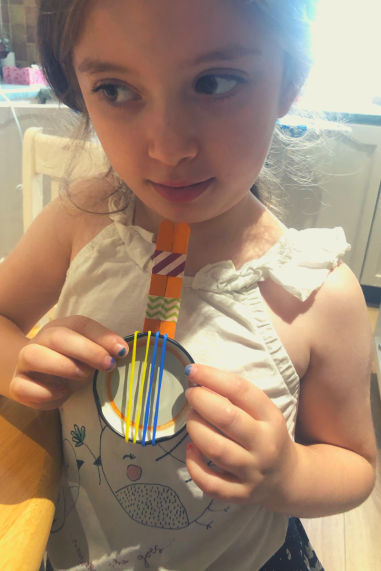 We tried to make fireworks in a jar too. It worked on a smaller scale, but I think we were held back by the quality of our food colouring 🙂 I had bought a couple recently that are red and green, but they aren’t very pigmented and didn’t give us the colour we wanted. You just add food colouring to olive oil and mix it, adding it to a jar of water and watch as the colours move like little fireworks shooting. It worked but wasn’t impressive-looking.

We made some bubble wrap prints. You just wrap a piece of it around the end of a toilet roll tub and sellotape it. Then you can put different colours of paints on a plate and make prints in several colours at once. The girls did this activity for a long time and it was so easy to set up. Today we went to the farm for the first time this year 🙂 We had missed it and they had organised plenty to do, even though certain parts were closed off. They gave us little packets when we arrived of feed for “furry friends” and “feathered friends.” We fed some goats and sheeps with curled horns 🙂 Then we fed some of the bunnies and a calf started licking my coat 🙂 It was so calming seeing the animals and walking around at a slow pace. I found the fact that the activities were limited easier as the girls weren’t rushing between things, spending five seconds on each activity 🙂 They went on barrel rides and the tractor ride to see the red deer. We held some chicks and fed the hens (and turkey.) I felt like my sanity was restored by the end of it 🙂 We also had some of the ice-cream they make on the farm and it might be my favourite kind 🙂 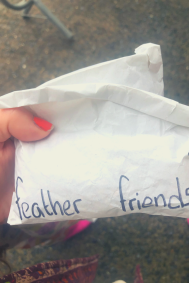 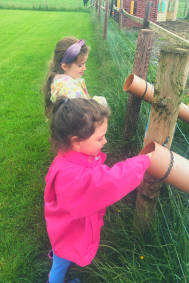 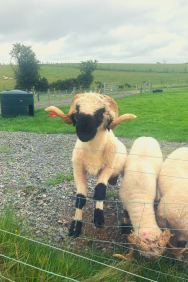 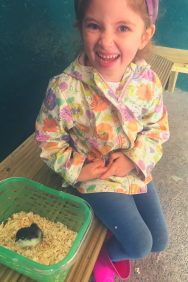 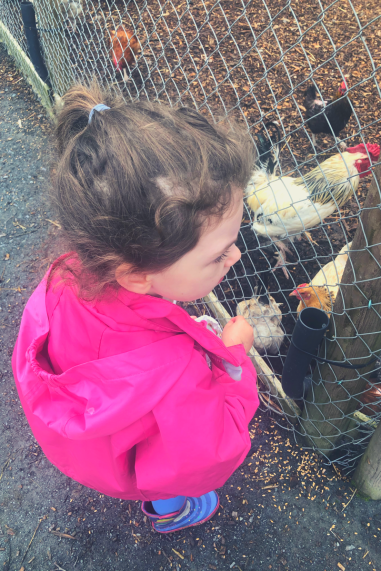 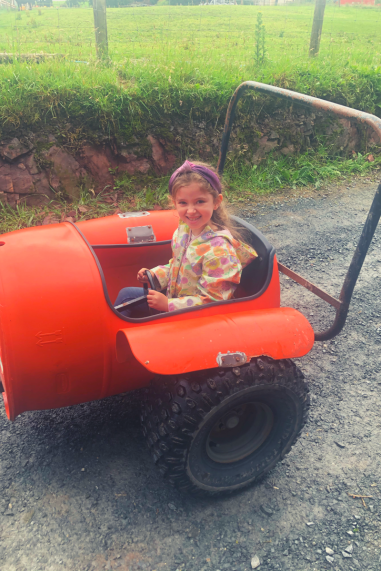 When we got home, we did some easy baking. I like to buy the boxes of baking mixes for days when the girls want to decorate buns and I don’t feel like baking 🙂 We just had to add a couple of ingredients and made some chocolate cupcakes. The girls loved putting the icing and chocolate swirls on top (and tried to sneak most of them into their mouths when I wasn’t looking.) I’m relieved its summertime now, even if the weather thinks otherwise. It feels like we have been released from the pressure of teaching at home and can just enjoy our days in our own way now 🙂 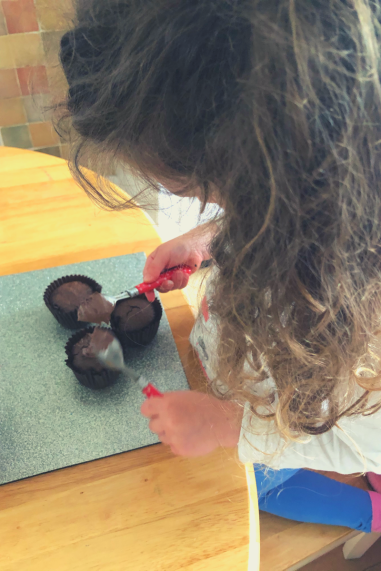 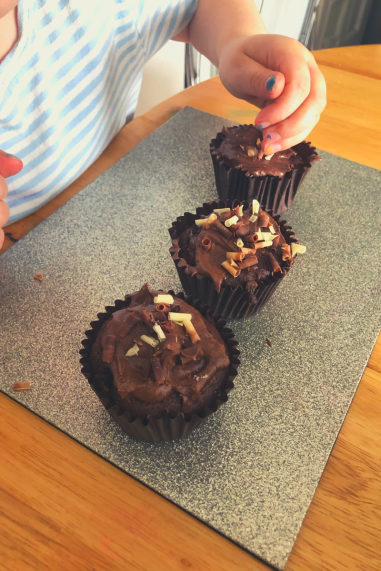