I’m just taking some time to reflect on what we have done in last week and catch up with recording some of it. Before the weather changed for the worse, we made good use of our garden and I set up a gardening game for the girls. I just filled the old barbecue they play with with soil and put it on their tuff tray, supplying them with kids’ gardening tools, empty plant pots and some sunflower and pumpkin seeds I found in the kitchen. The girls loved planting their own seeds and watering them. I doubt they will actually develop into plants, but the fun of this game was in making a mess and recreating gardening for them without adult interference 🙂

My younger daughter has taken to bugs in the last couple of weeks and says she wants to have one as a “pet.” It was good to see them being gentle with insects and showing an interest in their body structures and eating habits 🙂

We still have a book from the library filled with activities for bored kids, so today I drew out some random shapes and the girls enjoyed filling them in to turn them into cats and dogs. It’s interesting to see that even if the girls are presented with the same starting page, they come up with their own ideas of how to draw them. 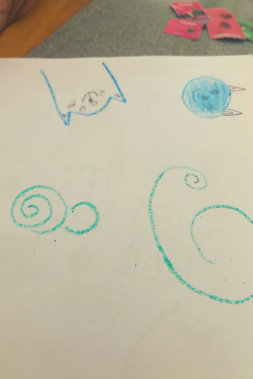 I got myself some yellow carnations and cheap candles at the shop, and it’s funny how such small things seem to enliven everything around you. I’ve decided that flowers might become an essential on my shopping list, and I love the fact that carnations last so long. A week later, they are still going strong 🙂

I made some tea for us and got out some recipe books out of the bookcase that I never seem to get time to look at. The girls enjoyed flipping through them too and announcing every recipe they wanted to try 🙂 One of the books had homemade lollipops in it that the girls, of course, want to try. I’ve never made homemade sweets before, but I might try it now while we have time to experiment with such things 🙂 It involved fewer ingredients than I would have imagined, but recipes involving sugar reaching exact temperatures intimidate me 🙂

I found a recipe for seafood chowder in one of the books and adapted it to go with salmon we had in the house. It worked out really well and the girls enjoyed it too. I’d always thought it would be a complex recipe but it was pretty straight forward.

My older daughter enjoyed drawing a map of our house (it was part of her homework.) She chose objects to hide, marked them on the map and we had to figure out where she had hidden them. There seems to have been a revival of hide and seek in our house too.

I also got the girls to do some fingerpainting. I might suggest adding faces and features to turn them into animals now they’re dry. We also made a big poster for the living room window of a rainbow made out of handprints. It was a good chance to talk about mixing colours too, since we only had four in the house. The sun had completely faded our other rainbow pictures in the window, which shows just how long we’ve been in lockdown for 🙂 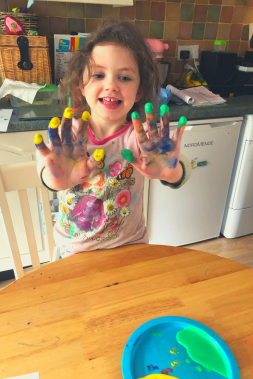 My daughter and I made some homemade pizza together. I made my own pizza sauce and I let her chop the mozzarella with a blunt knife, which she was excited about. She laid them on top of the pizza. She is really enjoying learning about cooking, and I might look up some more savoury recipes later to try with her.

My neighbour kindly gave us some date and walnut bread. It was lovely with a cup of tea 🙂 We have a new tradition of leaving baked goods on top of each other’s bins since we’ve been staying at home 🙂

On Sunday, I was feeling depleted and suddenly worn out from constantly cooking and washing dishes, so I ordered brunch to the house. It was so nice to have a latte made for me by someone else again 🙂 The girls said it was the best day ever, so they must be tired of my cooking too 😀

I ordered the girls a kids’ encyclopedia online and it is presented in a vibrant way that actually holds their interest. I made some hot chocolate and marshmallows on a grey day, dug out a felt board dress-up game and we played a version  of tic tac toe suggested by my daughter’s school using different coloured dots cut out of paper.