This week, we have spent a lot of time at home, (obviously!) being creative and creating mess I never seem to get on top of. I’ve resigned myself to the fact that there will be no order to our house until the girls return to school – or maybe that is just wishful thinking, as clutter just seems to follow me around.

We went for our usual walk on the Greenway. The sound of the pigeons under the bridge makes me laugh every time we descend the steps now because the girls are convinced they are owls and mimic the sound for most of the walk. Due to the fact that the greenway is mostly greenery, when colour pops up, it’s immediately noticeable. I have no idea what this plant is, but I like the yellow petals; it’s like the bare twigs have put on little yellow skirts overnight 🙂

A couple of days ago, I got the girls a water beads set. They had never used one before, and the fact that there was only one bead pen in the set encouraged them to take it in turns. They were both so excited to try it that they were actually courteous to each other about sharing the project 😀 I think it was good value for what was included. There are several bead pictures to make and one of them kept them busy for an hour 🙂 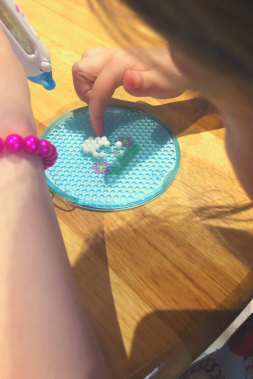 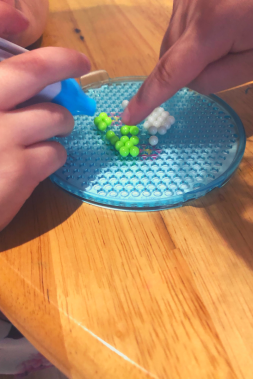 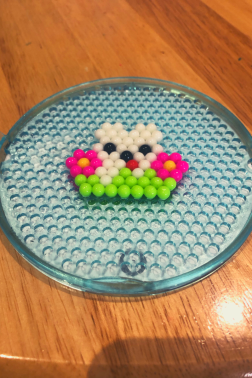 I decided to try out some different coloured homemade play doh. I had picked up some red and green food colouring when we got groceries. The green was less vibrant than I’d imagined and the red made the play doh resemble raw mince 😀 But the girls didn’t seem to mind – maybe it made them feel more like real ingredients 🙂 They played with their dough in their tuff tray until the rain started, and then moved it in to the kitchen table. I gave them a couple of old half-filled dried herb shakers, so they could season the pretend food they were making. Those caused more excitement than the play doh did. 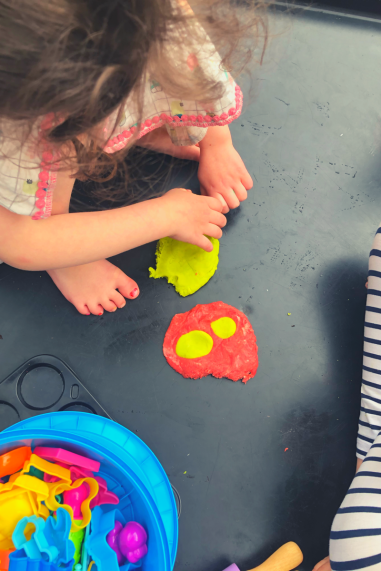 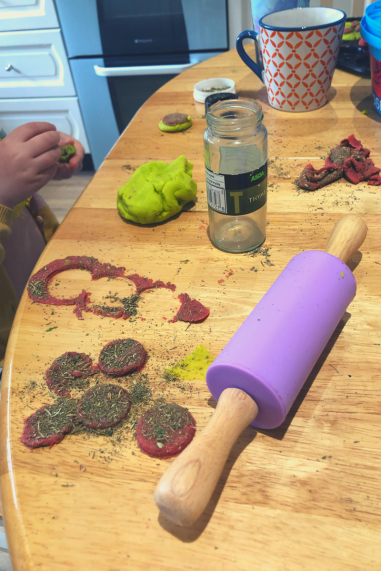 I received a lovely surprise in the post from my parents. It was a box filled with my favourite candles, all literary-themed. There was also some passionfruit and blood orange tea included. The girls loved it as much as I did and it’s already gone 🙂 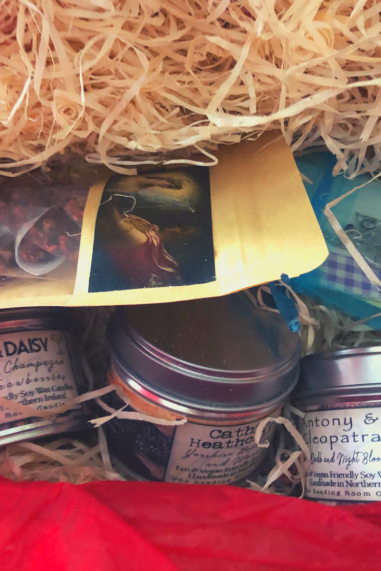 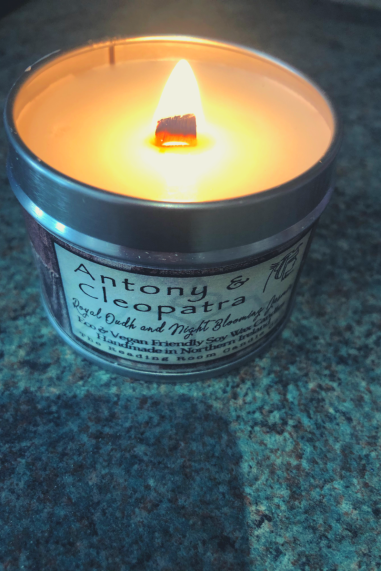 I decided to make Chinese food for dinner, as we had picked up some prawn crackers at the shop and I had the ingredients to make fried rice and sweet and sour. I set the table with straws and napkins, tealights, a jug of juice for the girls and played traditional Chinese music in the background, so we could pretend we were in a restaurant. The food wasn’t exactly authentic, but it still tasted good, and the girls liked the novelty of having our own restaurant. Afterwards, they insisted on doing the dishes, and I was happy to let them 🙂 Today, we did the Pyjamarama festival, held by the Book Trust. They had a programme of online activities for kids and the idea was that you stay in your pyjamas all day whilst completing them. That didn’t last very long for us, because we spend so much time in the garden and my kids don’t tend to sit still 🙂 In the morning, the girls did a guided drawing of a teddy bear. They took their time copying it and then listened to a storytime video. My older daughter had to do a picture of The Golden Fish painting for school, so I included my younger daughter in the process and they painted their own versions. They are both always keen to paint and sometimes I join them. Other times, I just enjoy the temporary tranquility to drink the rest of my morning coffee, which was what I did today 🙂 The girls wanted to play in the garden and there was a spell of sunshine, so they cycled in circles on their bikes 🙂 They played a game of naming all the plants they could remember in our garden, and I was impressed by how much they’d taken in. Maybe they will make better gardeners than me 🙂 They are currently growing some broad beans my neighbour gave them as gifts and keep checking on them to see if they’ve produced beans overnight 🙂

When it clouded over, we returned indoors and did another activity from the festival: a video about making diaries. They had to draw a picture of themselves and then print off a photo of somewhere they’d been to that day, (for example, in the garden, out for a walk, at the shops.) They had to place the pictures of themselves in front of the scenes and glue them on. Our photos came out very green, probably due to my poor printing skills, but the girls really enjoyed making them, and green is my favourite colour anyway 🙂 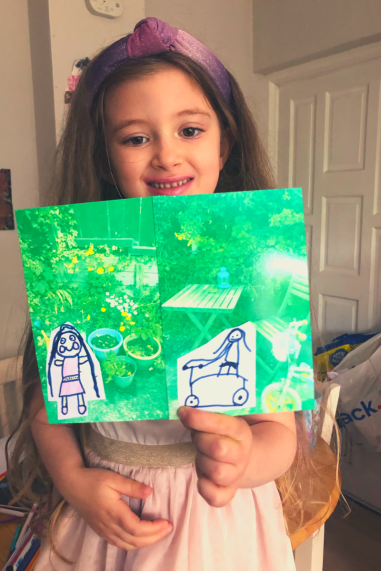 The girls did another interactive storytime and enjoyed joining in with the rhyme and stories. Afterwards, I noticed we had consumed all of our baked treats, so I decided to try a new recipe with them. I found one in a magazine for Abernethy Biscuits with fennel seeds. I didn’t have fennel seeds in the house, so I decided to improvise and use Allspice instead and they turned out really well 🙂 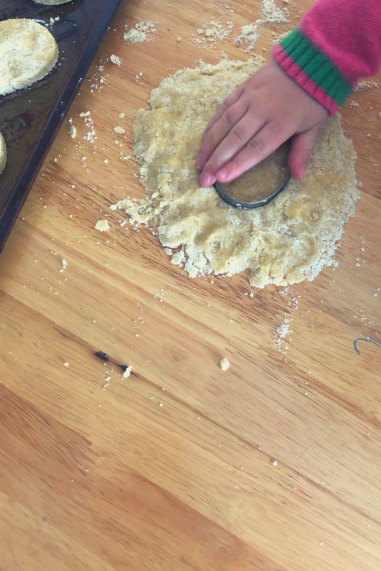 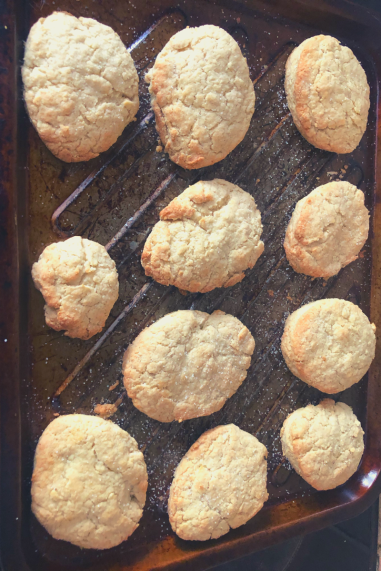 We had a little tea party when they were ready and I made the last of our tisane tea and served it in cups and saucers, with tealights and our biscuits 🙂 I had printed off worksheets for the girls to complete from the Pyjamarama page, so they designed their own bookmarks, did some matching games and designed their own pyjamas. I’m so grateful for these kinds of fun worksheets – they provide needed distraction during difficult moments 🙂 Tonight, we made some homemade pizza and had a movie night and ice-cream. I’ve been trying to do a little less writing in the evenings at the moment and spend more time on yoga and reading in the bath 🙂 I feel too drained to write after a certain time of the day and I’ve accepted my word counts will be reduced by the constant company I have at the moment 🙂 I feel forced to slow down, and maybe that’s what we all need most.