On our walk along the Greenway earlier this week, I noticed that the flowers bordering the pathway are starting to change. One of the grassy banks is paved with stepping stones leading up to some bluebells, and we found some clusters of them further along too. Repeating the same walk over and over is allowing us the opportunity to detect small changes we wouldn’t otherwise have noticed, and in a way, the limitations are making us appreciate the little things more.

My daughter loves the clay workshop she does when she’s at school, so I decided to order a box of air-drying clay for her. My younger daughter tried it for the first time. She liked flattening it and using it as a base for pictures, while my older daughter likes making models with it. She made a pearl inside a shell and a two-toned heart.

I always find that my kids turn their noses up at the most time-consuming meals. I had some hot dogs and decided to try making them threaded onto spaghetti, which I had seen online somewhere a while ago. You just cut them up and push them onto the dried spaghetti before you cook it. It was weird how something so simple fascinated my kids so much. I made a simple tomato sauce to go with it. I just soaked a couple of tomatoes in boiled water, peeled the skins off, chopped them up finely and cooked them with dried herbs and sugar. It tastes much better than pre-made pasta sauce or tinned tomatoes (although I like it too, and I’m rarely in the mood for peeling tomatoes :D) 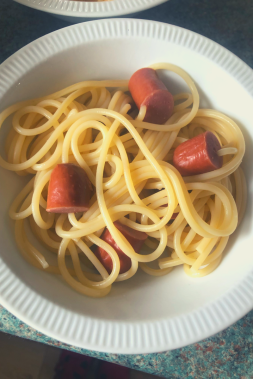 I set up another tray activity for my daughter outside. I used an old ice-cream tub filled with mud – I just mixed some soil and water together and made it extra muddy. I put some of her plastic animals in it, so they could “roll about in the mud.” Then I gave her a toothbrush and her dolls’ paddling pool to give them a bath afterwards.

I like the way when I give my kids a messy task, they change it into another one when they’re finished. (The clean-up version of me isn’t just as happy about this.) The girls got out their buckets and spades and made some mud pies in them too. They have an old tea set they use in the garden and filled them with mud and water, putting the teacups in a cardboard cup holder my daughter dug out of their junk box. I find that more and more, they are going to the cupboard by themselves to find a specific material for a project they have in mind and I like to see their creativity coming out without interference from me 🙂 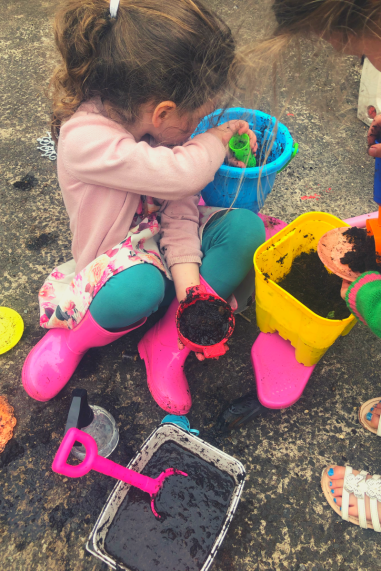 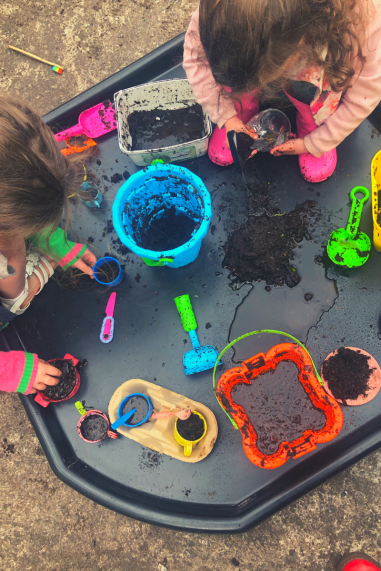 I had ordered some earrings and a top from a lady in Denmark. I love everything she sells and wanted to support her business too. They arrived today and it felt like an extremely early birthday present 🙂 She had put the top into a pretty silk bag and it cheered me up when I opened it and saw it 🙂 I’m definitely noticing people’s thoughtful touches even more now. I made some time for trying the things I’d bought on and then made myself a latte to drink in the garden while I got some writing done. (Thank God for TV time :))

Today, I also set up a pretend cafe in the garden for the girls. I just gave them some cups and spoons, a filled watering can to use as a kettle, some out of date hot chocolate powder and a few marshmallows and teabags. They loved creating their own hot chocolate and topping it with the marshmallows. It isn’t an activity I’d encourage them to do often because I hate anything that feels like wasting food 🙂 But it made for good messy play and they loved it. 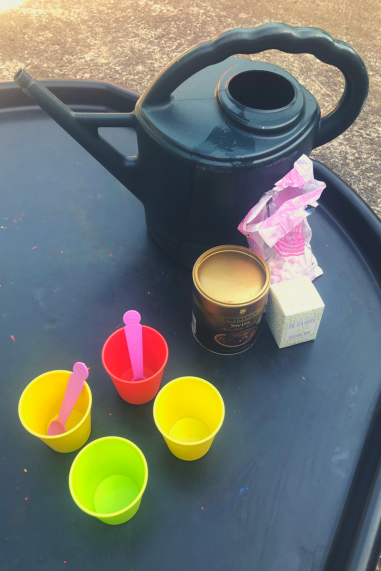 Tonight, I am listening to some new calming music, doing some writing and I’m attempting to bake my first ever sourdough. I checked my sourdough starter earlier and was excited to see that it floated when added to water, so it should be ready for use. I’m hoping the end result resembles bread, even if it doesn’t taste anything like sourdough 🙂