This weekend unintentionally ended up being busy. I’d planned on having a slow weekend in the house, but I always forget that is unachievable without structured activities for my energetic kids!

We started off with some belated Pancake Tuesday celebrations (although I usually make pancakes at the weekend anyway :)) One of my kids loves them, the other loathes them. I find it hard to understand how anyone could dislike pancakes. When I used to live in Paris, my friends and I went to a place called “Breakfast in America.” I always think of it when I make pancakes and try to recreate their plate-sized ones. They also had blueberry-filled ones that I make sometimes. Afterwards, I decided to make some homemade play doh. I have a recipe that is so easy to make and you can keep it plain or add food colouring if you like. I had yellow and blue, so we made two colours and the girls enjoyed shaking glitter in at the end and kneading it. I’m always surprised by how long play doh keeps them occupied for. They literally played with it for hours. Cutting it up into tiny pieces with scissors and pretending they’re making popcorn is their favourite thing to do with it, along with baking cakes, ie, putting play doh creations on a baking tray and pretending to put them in the oven under the table.

I had booked the free screening for kids at the cinema, so we went to see Finding Dory and brought our own snacks and drinks. We walked there to get some fresh air. I notice if we don’t get any it really affects my mood, and not in a good way 🙂

After the film, we called into a local ice-cream shop and the girls tried screwballs for the first time. They had never had bubblegum before and wondered why bubbles didn’t magically appear the minute they started chewing it. I had some coffee ice-cream with white chocolate sauce 🙂 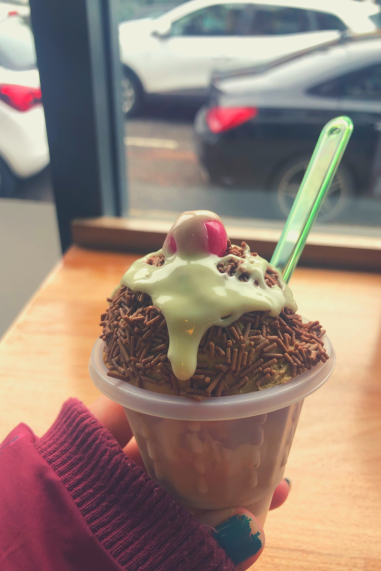 As we were walking home, it was getting stormy, so we retreated inside and the girls resumed their play doh play. I lit a new white chocolate candle I had. I always feel like lighting a new candle marks a new beginning… of what I’m not sure… hopefully nothing sinister 🙂 I always have a candle burning and a place doesn’t feel like home without it 🙂 It makes a good substitute for our blocked-off fireplace 🙂

The girls have a big art set I got for one of their birthdays. It is filled with pens, pencils, watercolours and opens out so they prop up their artwork while they draw. It has provided so much entertainment and the girls decided to do a joint effort picture with watercolours and painting sponges. I wouldn’t have thought to combine the two but they were happy so I let them work away 🙂 It turned out really well. I like the way there is a dividing line down the centre of the page. It reminds me of when my sister and I used to argue and we made a line in the middle of our bedroom so we each had a side 😀

I finally got a bike rack for the car for the girls’ bikes. We have a little yard at our house where they can only cycle in circles, so they were excited to get out in an open space 🙂 We went to a nearby park which I love because it’s like a secret park – no one ever seems to be there when we use it 🙂 We stayed for a long time and even though it was bitterly cold, the sunshine made it bearable 🙂 I went on the swings for a while too (when I was allowed a break from pushing everyone else.) I noticed some springtime flowers and it cheered me up seeing some colour. It feels like years since there was any colour other than grey 🙂

Afterwards, we went to my mum’s house and the girls continued riding their bikes in their cul de sac. They have a couple of friends they see there sometimes and had a great time playing with them. My mum made them some hot chocolate in cute little cups she got for them and we all warmed up inside. We also saw a frog outside the house which the girls were fascinated by 🙂