During the half-term holidays, I took the girls to Glasgow for a few days. I used to live there and it’s my favourite place to visit with them. It’s a special place to me because it’s where I spent my early adult years and I have a filtered version of living there in my mind that only captures the good times 🙂

We started our trip with breakfast and magazines in the airport. I’ve decided kids’ magazines and activity books are a lifesaver when it comes to travelling or eating out. My kids don’t have iPads so I need something to hold their attention and keep them in their seats during periods of waiting 🙂

I love the fact that the flight to Glasgow only takes twenty-five minutes, so there isn’t time for kids to get bored and torment other passengers 🙂 We stayed in an Airbnb in the West End, near where I used to live.

On our first day there, we went for lunch in a pizza place. We discovered it on one of our visits and the pizzas are all under ten pounds 🙂 We also visited an ice cream and churros shop. I love the churro bites with Biscoff 🙂 The girls spotted a kids’ clothes shop they love. Sadly, one dress costs more than their entire wardrobe combined, so they just stare wistfully through the glass and make me feel like they’re deprived 😀 The exterior of the shop is decorated with little clear globes containing objects that look like toys, so the girls were mesmerised by them too. We arrived the day of storm Dennis and some other flights had been cancelled so we were lucky to get there 🙂 We did a lot of walking around. It’s strange how much a city can change in only a few years. The deli where I used to work had closed down and so many new businesses have opened up that the streets are barely recognisable in parts. For some reason, when we visit Glasgow, my kids are happy to walk for miles, but at home they aren’t keen on even walking to school 🙂

We called into Waterstones and the girls loved looking at the cheap plastic toys… just the reason you’d call into a bookshop! They got some dinosaur finger puppets and I got some vinyl coasters 🙂 I don’t know if it’s because the girls are getting older, but they are suddenly interested in exploring cities and rummaging through items in shops. (Well, maybe they always enjoyed the second part.)

I love the style of the buildings in Glasgow and the little lanes that are dotted around the place. I discovered a new Vietnamese restaurant I’d like to try in one of them 🙂 Apparently you can select an option where the chef serves you surprise dishes so you don’t have to decide what to order.

When our feet were getting tired and we were still waiting to check in, we retreated to a tea house I used to spend a lot of time in. It was a different experience as a student to how it is with kids! But as long as I plan ahead and bring toys, the girls enjoy it too 🙂 There is an area where you can sit in a little “zen room” on cushions on the floor. I had some chai tea and the girls opted for apple juice. They tried my tea, but declared it “too spicy.” At least, for once, I didn’t have to share 🙂

On our second day there, I took the girls for a walk in the Kelvingrove park. I’m convinced their sense of direction is already better than mine (which wouldn’t be hard.) They bounded ahead of me towards the playground, like they knew exactly where it was. I love the way the novelty of a new playground keeps kids occupied for so long. They were more taken by it than any tourist attractions I could have taken them to. There is a duck pond and they spent a long time watching the ducks and bemoaning the fact we didn’t have food for them. 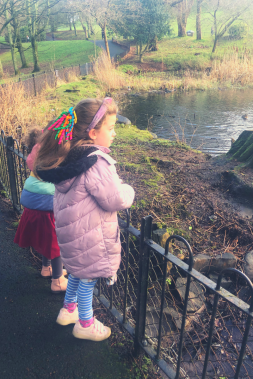 Afterwards, we walked to the museum and spent a long time there. We saw the famous bobbing heads and the elephant 🙂 There are more interactive exhibits than I’d remembered there being. The girls enjoyed playing with the dressing up box and the bed. I think it was there so they could act out scenes of sleeping princesses  (minus the sleeping :)) 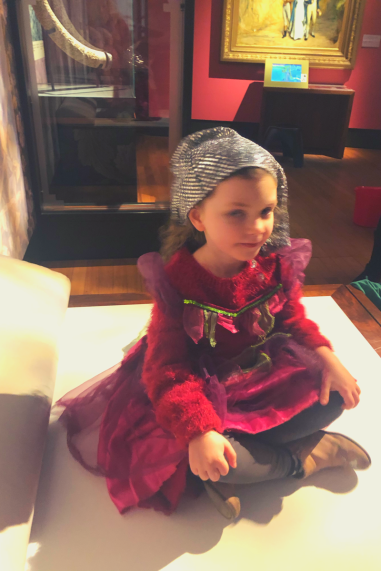 For once, I actually got a chance to read some of the descriptions on the paintings. There were a couple of games for kids to play in the art gallery too. They could assemble faces, changing the eyes, noses and mouths, and stick magnetic objects onto a background to recreate a painting in the gallery.

After our visit to the museum, we went to a vegan bar/restaurant for lunch. The fire was lit, along with pillar candles and it was a lovely contrast to the wild weather outside. I took advantage of the fact I didn’t have to drive and had a flavoured cider 🙂 The girls unknowingly ate vegetarian chicken nuggets 🙂 They usually detect every small change to what they normally eat, so that felt like dietary progress 🙂 We sat for a long time. The chill-out music definitely settles my kids and they coloured in pictures of flowers the waitress had brought them 🙂 The pub used to be my local and they had jazz and dub nights I went to. It’s bittersweet visiting the city now that life is so different, but I think visiting it with my kids eases any sadness it might bring with it. Creating new memories with them, alongside seeing old friends makes the place all the more special. 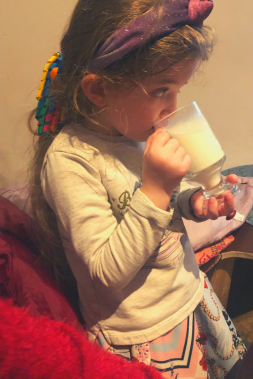