Today, I took the girls on an impromptu day out, planning on just having a walk around the Folk Park. It turned out to be the best Christmas event I’ve ever been to. We are members of the Ulster Folk Museum, so the day out was free. We arrived at the park and were greeted by an old fashioned Santa with a bell and a green suit. He had a long chat with my kids about Christmas time and what he “remembered” from last year. We had been given a page with a Christmas hunt and had to find the hidden clues to win a prize. As we started walking into the little town part of the folk park, I thought it had started snowing and the girls got really excited. It turned out there were bubble machines placed around the town that produced realistic snow. It was a misty day and the whole scene reminded me of a Dickensian Christmas. 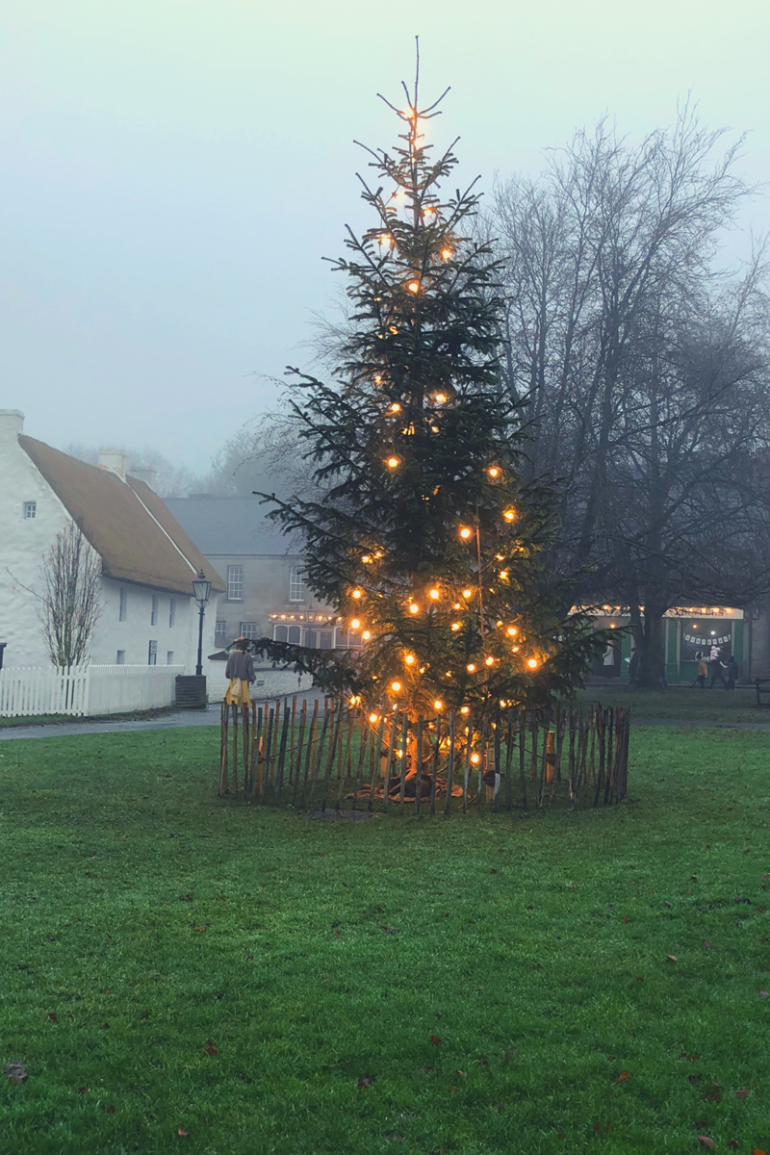 Usually when we go to the folk park, it isn’t in full operation. There usually seem to be parts closed off or unoccupied, but everything was open today and staffed, and there was hardly anyone there 🙂 that’s my favourite kind of Christmas outing – one without hoards of people 🙂

I think they mentioned that there had been a candlelight carol service on the previous night, and maybe more people had attended that, so it was the best time to go 🙂

The pub was open and there was live Irish music being played and a choice between alcoholic and non alcoholic mulled wine. My kids had some of the punch and loved it. We sat at an old wobbly table and listened to the music and chatted. I’ve been becoming increasingly bothered by the consumerism of Christmas time. I don’t know if it’s because it starts earlier now and the build-up is heightens it, but I’ve just noticed the madness and poor manners have been worse this year than any I remember. (Maybe I’ve just blotted it out.) I loved the fact that today ran counter to that and I didn’t have to subscribe to the suffering for a little celebration.

We went a cottage where a lady had made vegetable soup on the stove and served some to us. I was surprised how quickly it vanished from the girls’ cups. Maybe I need to get a stranger to cook for us to get them to eat 🙂 It was already dark inside and the fire and candlelight were cosy.
Afterwards, we went to the old schoolhouse where the girls got to write Santa letters. A man in costume who worked there helped them stamp the letters to be posted at the post office later on our walk.

There is a thatched cottage with gardens that are beautiful in the summer. We heard music coming from inside and when we went in there was a group of musicians playing. They played Jingle Bells just for the kids and were making a wooden toy dance. The guitarist had a willow, woven star hanging from her guitar and they were dressed in fancy clothes. A lady had been cooking in a pot over the fire and we got to try a steamed Christmas cake filled with currants. It reminded me of a boiled cake my granny used to make.

In the printers, a man showed us the process of printing Christmas cards with a printing press. He also made bookmarks and pictures. He talked to us about the differences between now and then and said that Christmas cards used to be made of paper and folded twice to make them stand upright. He let the girls make simple cards of their own with traditional stampers.

We walked to the post office and the girls posted their Santa letters in the post box. Next door, in the house adjoining the bank, there was a lady making chutney and she offered some crackers and apple chutney to the girls. She told us about the two kinds of ovens they had, to bake and to roast in and talked me through how to make your own Christmas pudding. She had made her own pudding and cakes, decorated with holly.

The girls danced in the pretend snow again and then we passed some people roasting chestnuts. My daughter loved pulling the outer shell off and trying them. We called into the picture house where they were showing silent movie clips about preparations for Christmas. It made me realise how much calmer things seemed then and today gave me a glimpse of it. I think modern society has ruined the traditions of Christmas by going overboard and it just makes people feel rushed and angry. When I looked around the streets, none of the houses had elaborate decorations. The smaller houses had handmade wreaths and pillar candles and the wealthier homes had simple Christmas trees with a few decorations on them. As I was noticing the small signals of Christmas, I also noticed how much simpler life was with fewer possessions. We have so many and I get overwhelmed by the clutter everywhere. The experience has put me in the mood to further simplify life and made me realise how excessive it all is. Happiness has nothing to do with things; in fact I think the presence of too many things and the pressure to buy them makes us a bit miserable.

The day ended with the girls getting a few chocolate coins for their efforts in the Christmas tree hunt and I’ve never seen them happier.